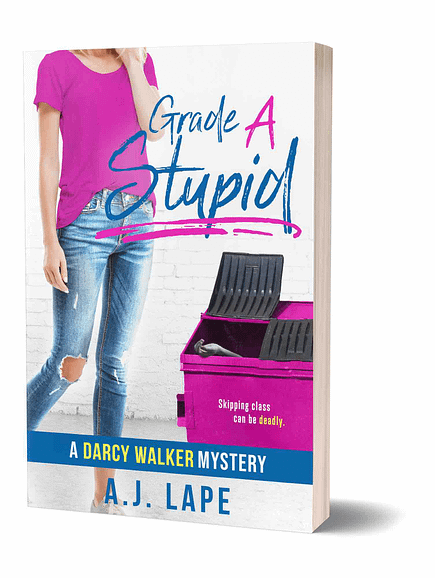 A murderer thinks it was the perfect kill. A teenage sleuth vows to have the last word.

Darcy Walker is a 15-year-old girl without purpose--pretty but disheveled, clever but directionless, and a practical joker who's allergic to schoolwork. In Darcy’s world, the best parts of her day are lunch, staring at bad boys, and when the final bell rings. But everything changes when she discovers a dead body near Valley High. It jumpstarts her inner-sleuth, and she vows to catch the murderer. Trouble is, will she live to see sixteen?

Summer break: The mob. A missing boy. And a web of lies.

Two weeks before junior year, Darcy hops a plane to Orlando for some R&R. Fresh off the heels of solving three murders, she's ready to sit back and enjoy the vacation capital of the world. Maybe if you're a noun. Darcy Walker, however, is nothing but verb. Before her feet hit soil, she's meddling in another mystery, trying to find a kidnapped boy.

Fighting crime. Dodging bullets. With a little bit of love on the side.

Murder isn't Darcy's only problem. All of a sudden it's raining men, and this teenage heroine's personal life turns her inside out. Before she can sort out her feelings, she chases a spray-painting vandal and stumbles upon a case of identity theft. Darcy jumps into the fray to prove she can hang with the big boys... and snag the reward money.

One evening at a nightclub leads Darcy to the most dangerous caper of her life.

Fisher Stanton has a cheating girlfriend. When he hires Darcy to chase her to a local club, in true Darcy fashion she stumbles upon a dead body. Thing is, this body has secrets...secrets that point to Darcy's past. DEFCON Darcy gives Darcy's demons a name. What she thinks she knows as truth, isn't. What she wishes wasn't true...is.

When Jon Bradshaw convinces Darcy to be his wingman at a speed-dating event, one debacle leads to another, and before you know it, they're the proud new owners of a dead body. Thing is, the body has a tie to Darcy, one that makes her look guilty of capital murder.

Need to release some stress or just kick back and relax? Color Therapy with Darcy Walker includes forty pages to color and keep you hidden in your fort for hours!

This novel is the first book in A.J. Lape's pulse-pounding and hilarious Darcy Walker Investigations series. A blend of Stephanie Plum with the thrilling shocks of Ballard and Bosch, Darcy is an underdog who solves crime one way—living life like a verb.

Darcy Walker excels at lies, deception, and outthinking the bad guys. She has the résumé to prove it. While waiting to attend the police academy, she takes her talents into pizza delivery. Little does she know, life as a delivery driver isn’t all pizza and wings.

NOTE: formerly released as Side Hustle, Season 1, Episodes 1-3, in an episode/serial format. This novel has all episodes combined.

This book is the second installment in Darcy Walker Investigations...and one thing still rings true. Living life like a verb comes with a price.

Darcy Walker is back hustling pizzas, fighting Los Angeles crime, and attending the police academy. When a customer confesses to her he might’ve committed murder, will she solve the case or be the next body in the morgue?

NOTE: formerly released as Side Hustle, Season 2, Episodes 1-3, in an episode/serial format. This novel has all episodes combined.

This novel is the third book in A.J. Lape's hilarious and electrifying Darcy Walker Investigations series-an evolution of teenage heroine to pizza delivery driver to police officer on the streets of LA.

Darcy Walker is a rookie police officer working the nightshift in the Los Angeles Police Department. A job tailor-made for adrenaline junkie Darcy, but one thing her new position entails is following the rules. Barely thirty days in and she fights the itch to go rogue when a Vegas mobster named Fat Tony sends someone to kidnap her and a reality television star winds up dead on her watch.

Against orders, Darcy bloodhounds Fat Tony behind her sergeant’s back and secretly runs her own vice op inside a TV series to find a murderer. But what she sees as going above and beyond the call of duty, detectives take as interference in their cases. She’s on thin ice, and they let her know it.

Can Darcy stay in her lane and leave investigations to those in the suits, or will Fat Tony kidnap her, and it won’t even matter?

Darcy Walker is back and entrenched in two crime thrillers that might kill her before walking a beat does.

Darcy Walker isn't making enough bank to pay her bills. But delivering pizzas as a side hustle hits a snag when she finds her customer without a pulse. Problem is, the victim is Ugly Pizza's biggest competitor, and her boss, Rollo, becomes a prime suspect.

For fans of Stephanie Plum, Veronics Mars, Fortune Redding, and other mystery-thriller heroines, Medusa Effect will leave you laughing one minute...then hiding under your bed the next.

Darcy Walker is back and entrenched in two crime thrillers that might kill her before walking a beat does.

Darcy Walker is settling into life walking a beat. But when she delivers a warrant off the clock, her life changes in an instant, giving her a deadly lesson she won’t soon forget. Going back to her roots for a temporary change of scenery, she can’t escape the reality that life has gone on without her—her father might have a girlfriend, her aunt has secrets, and her little sister dresses like a stripper in her prime.

5 Pounds of Pressure is the electrifying fifth novel in the Darcy Walker Crime Thriller series. If you like shock-a-minute twists and heroines who won't quit, then you’ll love AJ Lape's intense mystery.

Darcy Walker is settling into life walking a beat. But when she delivers a warrant off the clock, her life changes in an instant, giving her a deadly lesson she won’t soon forget. Going back to her roots for a temporary change of scenery, she can’t escape the reality that life has gone on without her—her father might have a girlfriend, her aunt has secrets, and her little sister dresses like a stripper in her prime.

Heist & Seek is the shock-a-minute sixth novel in the Darcy Walker Crime Thriller series. If you like gritty twists and heroines with a sense of humor, then you’ll love AJ Lape's newest funny mystery.

An action-packed series starter: Ruthless criminals. Sordid covers. And a vice operative who's very good at being bad.

Ruby Rivera has come a long way from running guns for a motorcycle club in Las Vegas. She's now a vice detective in the LAPD, spearheading an op to dismantle a sex trafficking ring led by Chauncy Ford. With her cover as Crush, Rivera's mission is to capture Ford's attention and snag a job as a prostitute in his organization. Besides a stubborn will to never fail, she's got two things going for her - great legs and she's a great liar.

Alejandro Gutierrez is haunted by demons - one tattooed on his back and the memory of the young woman he couldn't save. As a leader to an organized crime syndicate, he's supposed to be all-machine. But he can't convince his heart to stop feeling. When a chance encounter with Ruby Rivera draws him into the middle of a sting, he finds himself attracted and offering his expertise.

Problem is, their day-jobs put them on opposing sides of the law.

When stakes are high and bullets start flying, will they work together as a team? Or will that opposites-attract thing blow up in their faces?

An action-packed series starter: Ruthless criminals. Sordid covers. And a vice operative who's very good at being bad.

Vice detective Ruby Rivera is one piece of evidence away from taking down notorious drug dealer, Mookie Spinks. But when her cover is blown, she reaches out to the only drug dealer who can piece it back together.

LA kingpin, Alejandro Gutierrez, needs an exterminator-one who'll take care of the rats in his buildings and the rat putting them there. When Rivera calls in a favor, he offers his expertise on one condition: she must provide information leading him to an old enemy. Trouble is, the detective knows Gutierrez serves one way--bloody.

When bullets start flying, Gutierrez is torn between saving himself and helping Rivera get her mark. Will their twisted alliance survive, or will Rivera cross a line she can't uncross?

When the only way out...is in a body bag.

Set in the high-rolling strip of Las Vegas, the men of 15 Saddles MC took an oath--trust, loyalty, brotherhood. But when their president is murdered, they find themselves living in a 24/7 hell-loop. As a new leader takes his place, lies unravel, secrets surface, and betrayal becomes epidemic. With enemies coming at them from all sides, even brothers can't trust one another. And the only way out...is in a body bag. (New dual POV each season)

What The Readers Say

Based on Darcy’s rec, I tried GM's Dark Magic coffee. It's indeed everything Darcy said about it. Give Green Mountain’s Double Diamond a try!

I love love love your Darcy Walker series!!! I’ve read them all the way thru twice and can’t wait for book 6. Please tell me there’s another book coming?

Are there going to be anymore audio books? I love listening to the books when I’m at work and I’ve already listened to one and two multiple times.

I can’t wait until the next book in the Darcy Walker Series comes out. How many books do you think there are going to be in total in the series?

Stay on top of the action!